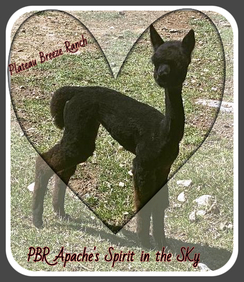 PBR Apache's Spirit in the Sky

I sit here and reflect on what a day it was. While I sat alone and watched the riots and protests on tv, I suddenly realized that I had forgotten to feed my baby, Spirit. I threw a bottle together and rushed down to her to find the herd distraught. The boy's bam on the other side of the property was loud, with lots of sounding of alarms. I realized something was wrong and thought about predators, coyotes, snakes, and God knows what else. "I'm here alone", I thought, but I have to do something. I rushed to boy's barn, hesitantly, not knowing what I would find. The yelling for help got louder as I drew near. I saw something I couldn't imagine. The feed bag, full of hay, and its handle was caught around one of the boy's necks. It was wrapped around at least three times. Bleu was strangling and I was his only hope. I screamed, no one was home. I thought about scissors or a knife but did I have time? Minutes passed as I thought about the possibility of getting kicked by a scared boy. I started to panic, but then I saw his scared eyes. I tried to free him but couldn't, so I started bashing in the post that the feed bag was tied to. It finally gave in. Bleu was free, and his freedom was evident. I felt free too and somewhat victorious.
Featured Items