The Electric Sky at PBR 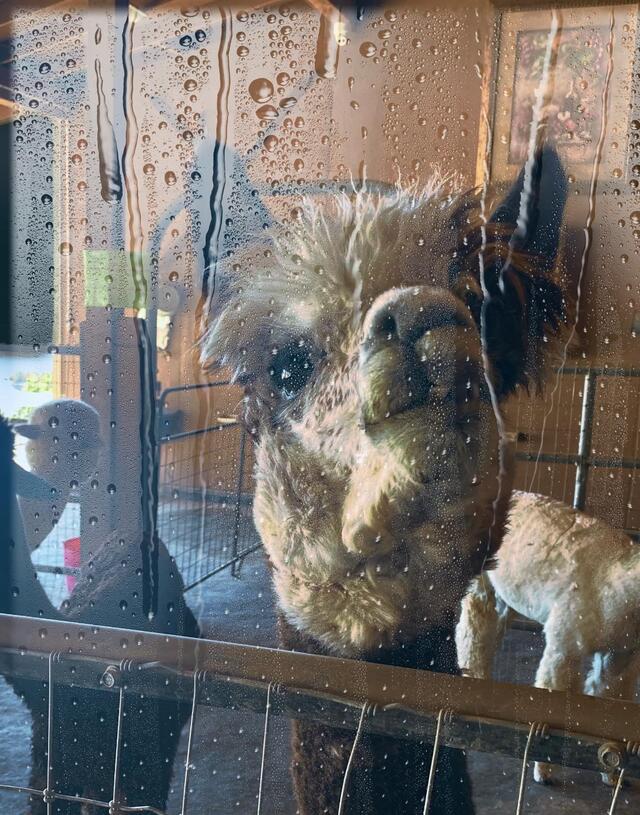 The Electric Sky at Plateau Breeze Ranch alpacas. The sky was dark and low with dense, black clouds as the wind whipped up, howling and warning into the premature sunset. The first crack of lightning lit the sky and within seconds the rolling boom of thunder reverberated overhead. My first thought was of the Plateau Breeze Ranch alpacas as I glanced at the barn cameras. The boom rolled across the open sky, announcing the start of what the looming cloud layer had promised. Our bench in the backyard under the red coral tree was vacant as we watched, from inside our home, the storm’s fury forming. I knew the trip to the barn was imminent as the raindrops began to fall, so I hopped into the John Deere, pulled up my hoodie and prayed that the alpacas would be okay.
The branches of trees swayed in the strengthening gust as the gator hit the muddy trail. Soon the rain fell, slow to start, splattering the front windshield in a haphazard way. Then it began to fall in buckets, cascading like a waterfall from the heavens. On the far hill, a jagged bolt of white lightning split the chilly sky, and then it was gone as I paused and wondered what the heck I was doing. The thunder was only a second behind as I opened the gate and saw the alpacas prancing and dancing in the muddy corral. "Get inside!" I demanded as they all looked at me like something was wrong! With wet top knots, soaked blankets and dirty toes, I grabbed a bucket of goodies, coaxed them inside while knowing that they wouldn't stay. It was a storm promising nothing but pure and awesome views. A night I’ll never forget.
Featured Items