We'd only had the ranch up and running (if you could even say that) for a month or two as we watched our females stomach's expand. We had no experience with alpaca childbirth but I must say Marc and I were very experienced with human childbirth. Together we had delivered four children, one in the elevator at the hospital with no doctor present, the other three very quickly and completely natural. Did that help us with Freckles birth? "Hell no!!!
I sensed something was going on at the barn as I made the trek down the long driveway. What I saw next was something I was hoping wasn't happening. In the middle corral stood Luzie Luna of Bright Water with two feet sticking out of her behind, and they were crossed!!!!! Being the only one at home, I utterly and totally panicked I reached for my phone. Darcy immediately picked up and asked for a photo. Do I have time to get a good pic? I thought and couldn't keep my teary eyes off of Luzie's hind quarters. Darcy calmly said "You need to uncross the legs and watch for a head to appear." What? Uncross the legs? I stooped down and grabbed the first leg I could get a hold of and never let my eyes drift from Luzie. Was I worried about the baby? No not really. I was more worried about getting a good kick to the chops!!!! I got a hold of the second leg and begin to try to figure out which leg was on top and which was underneath. With each contraction, I tugged a little after listening closely to my coach. Aha! A head was present and the birth was moving right a long. I remained stooped watching and tugging with each contraction. I was in deep concentration when I noticed our ranch hand come around the corner. His eyes grew large, a concerned look formed on his face and an "Oochy Mama" left his lips. I couldn't believe it as I slowly smiled and said "I know." With a few more grunts, Freckled Bliss of PBR was born. She was beautiful, bright white and covered in fawn spots. A beautiful appaloosa. Everything I could dream of and aw, the satisfaction of helping Luzie deliver her baby was indescribable.
Featured Items 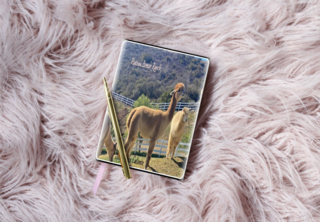