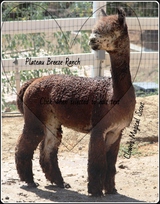 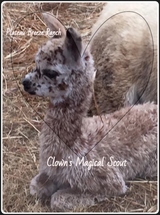 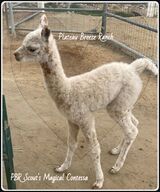 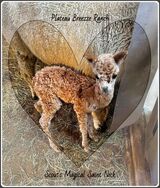 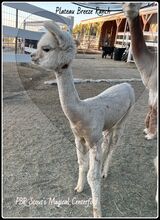 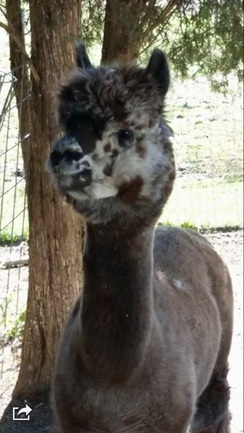 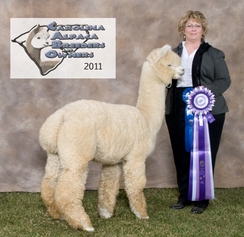 This boy, Clown's Magical Scout, has it all! Excellent conformation, great genetics (Pluro, Black Magic, Derwydd's Peruvian Haya, Magnifico) on the top and Hemingway, Accoyo El Nino, Star Khan) on the bottom! His pedigree includes outstanding appaloosas, harlequins and such extraordinary fineness. The most special attribute about Scout is his coverage from head to toe. And attitude!!! He's sure to make you smile when you think of a greaser with a pack of cigarettes rolled into his tee-shirt sleeve! He's all that, and he knows it! To date, Scout proved himself with six gorgeous crias on the ground, including PBR Scout's Magical Contessa (sold), PBR Scout's Magical Mclaren, PBR Scout's Magical Hennessy, Saint Nick (sold), PBR Scout's Magical Centerfold and PBR Scout's Magical Krush. All six are appaloosa or both harlequin/appaloosa. Whether your goal is for spots or fineness, incredible fleece, Scout is your guy. Add his genetics to your herd! You'll be as glad as I am!

Picasso's Peruvian Spotted Clown, Scout's sire, is also an appaloosa. His great-grandsire, Derwydd's Peruvian Haya, though now deceased, was the rarest of alpacas. Full Peruvian, Accoyo lines, light silver grey, Harlequin, Appaloosa, a solid blanket and appaloosa spotting in all the best places. His stature defined herdsire, standing at 5'2", weighing 227 lbs, perfectly proportioned, excellent conformation and good presence. Haya's Grandsire is the famous PPeruvian Pluro G4571. Accoyo Pluro, a superior sire, was bred by Don Julio and used in his "Majada De Plantel", his best herd. In the short time PPeruvian Accoyo Pluro was in the US, he produced many exceptional offspring, making him one of the top herdsires in the country. Then, early in his breeding career, he was sold to an Australian investor and was one of Australia's top herdsires. Accoyo Pluro's offspring are known for their incredible fiber, coverage, and ample bone. Pluro is now deceased(2003), making his genetics very rare.

Derwydd Manchu's Suyana, Scout's dam, is a stunning white Accoyo/Hemi-Accoyo out of El Nino and Hemingway lines. She won 4 blue ribbons and 4 Reserve Championships in 2010 and 1 blue ribbon and a Color Championship in 2011. She is extraordinarily dense and refined, with excellent uniformity.