Out of MFI Peruvian Cactus Jack

Multiple champion MFI Pins and Needles is the medium fawn daughter of MFI Peruvian Cactus Jack who sold in the 2007 Breeder's Choice Auction for $150,000. Like her sire, she has it all...outstanding, advanced fawn fleece with high-amplitude, high-frequency crimp and an excellent phenotype. She graciously passed it on to her first cria, PBR Divine World's Bellagio who won in 2020 as a AOA National Show Champion at eight months old!!. Check out his page. Her sire, MFI Peruvian Cactus Jack, has ...
More Details
| AOA# 35159070 | White, Medium Fawn
Ask For Price
Ask seller a question
Details
Certificate Histogram
PBR Divine World's Bellagio- Males of this caliber are rare, especially when such superior genetics for fleece production are packaged in a phenotype this outstanding. This Snowmass Divine Love grandson will improve anyone's breeding program, including our own. Superior fineness, micron-adjusted uniformity (17.4 afd!), extreme brightness, bundling beyond belief and extension of blanket are the reasons why he took Champion at the AOA National Show. What an accomplishment at just 8 months old!!!!

Multiple champion MFI Pins and Needles is the medium fawn daughter of MFI Peruvian Cactus Jack who sold in the 2007 Breeder's Choice Auction for $150,000. Like her sire, she has it all...outstanding, advanced fawn fleece with high-amplitude, high-frequency crimp and an excellent phenotype. She has lots of color in her pedigree.....grey, rose grey, fawn, beige, and brown. Her sire, MFI Peruvian Cactus Jack, has won reserve champion three times and is in the top 15% for fiber diameter, spin fineness and crimp. What makes Jack so special other than the offspring he is producing? *Perfect phenotype: balanced proportion, erect presence, straight legs, correct bite, gorgeous head, luxurious coverage, rich color, soft handled fleece, tight crimp, tremendous density, long staple, well organized bundling, and serious pedigrees with familiar names. Jeronimo S282, Pperuvian Guellerermo, Pperuvian Epifania, and Cperuvian Silvio. Pperuvian. Pperuvian Guellermo sired some outstanding progeny on the west coast when he was first imported from Peru, he was not widely known until his return to the United States in 2002. During his time in Canada, Guellermo produced numerous Champions, many of whom were out of Bolivian dams. The successful hybrid vigor resulting from the Peruvian/Bolivian crosses has become well recognized. In fact, just this summer, Mike Safley imported a Guellermo son (out of a Bolivian dam) from Canada to add to his STUDMASTER line-up. Her dam, MFI Ready to Run, an incredible bundling fawn, is daughter to Pperuvian Ramona B4394 who has produced numerous champions for MFI. MFI Ready to Run's pedigree includes alpacas from the heart of MFI breeding program, MFI Peruvian Jericho, Peruvian Dakotia and NWA, LTD Jean.

To make things more intriguing, PBR Divine World's Bellagio's sire is none other than R Creek's Divine World. His pedigree includes his sire, Snowmass Divine Love, one of the legends of the Snowmass breeding program whose dam is the great Snowmass Maree Love, making him maternal 1/2 brother to the legendary Snowmass Quechua, and sired by Snowmass Conopa XXX. He, like his sire, has since been exported to Canada. With Peruvian Dakotia, MFI Peruvian Jericho on his dam's side and Snowmass Maree Love, Hemingway and Snowmass Simply Scrumptious on PBR Divine World's Bellagio sire's side, he is insanely crimpy, bright and gorgeous.
Awards 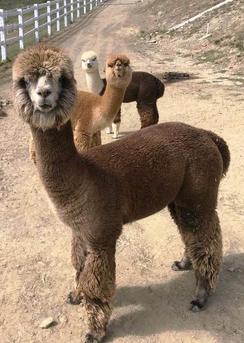